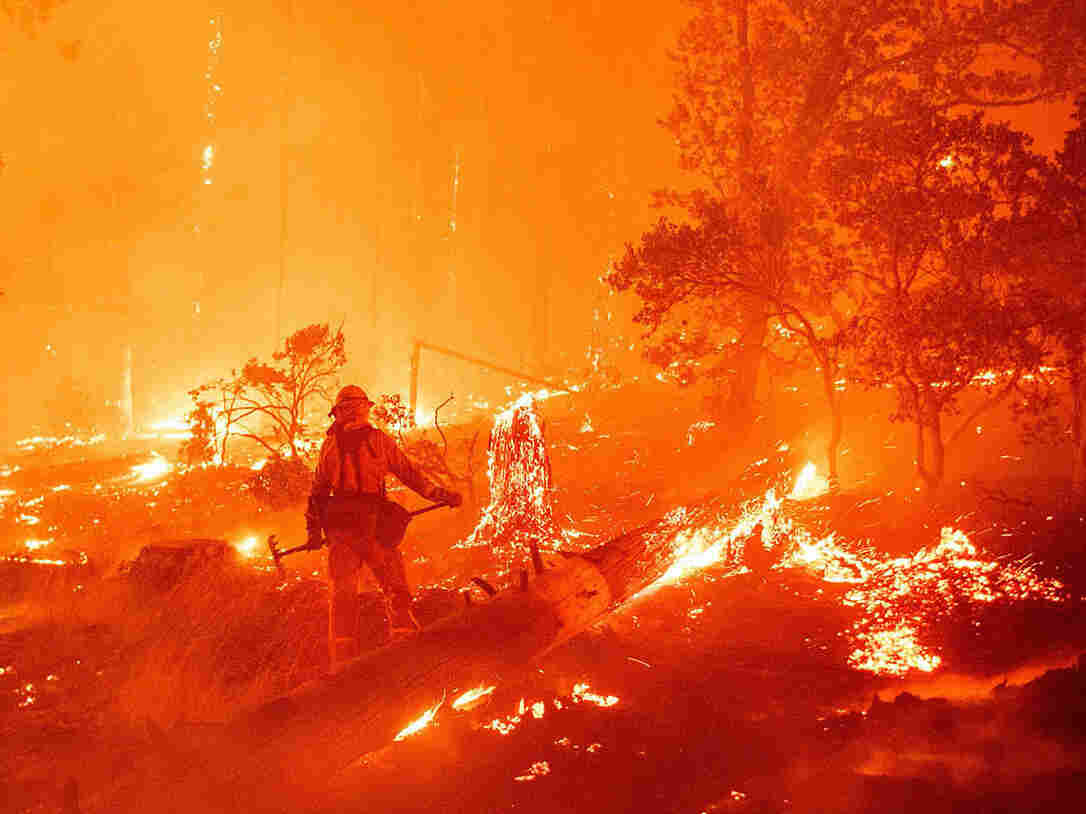 Wildfires across the West, such as the Creek Fire here in Madera County, Calif., are pushing firefighters to their limits. Josh Edelson/AFP via Getty Images hide caption

It’s become a near-annual occurrence. A massive wildfire forces thousands of people to flee their homes. Exhausted firefighters warn of its speed and intensity. Smoke smothers cities and states hundreds of miles away.

The yearly eruption of hundreds of wildfires across the West is no longer surprising. What’s surprising is “our society’s ability to continue to tolerate” lives lost and billions of dollars in damages and firefighting costs, year after year, says Tom Harbour, the former director of fire and aviation at the U.S. Forest Service.

Especially, he says, when we know of ways to reduce the risk.

The wave of fires that erupted this week on the West Coast, like previous record-breaking blazes, are further validation of something forest ecologists and fire veterans have been saying for years: that no amount of firefighting resources will avert the next big wildfire. Nine of the top 10 largest wildfires in California history have occurred in the last decade despite massive investments in new technology and equipment.

“We can’t ‘one more engine, one more hand crew’ our way out of this,” Harbour says. “We’ve got ourselves into a big problem, and it’s taken some time. It’s going to take some time, energy and effort to get our way out.”

The nation needs to rethink its relationship with wildfire, ecologists and firefighters say. Instead of treating it as a threat to be swiftly extinguished, communities need to learn to live with fire, as people have before.

Increasingly, communities and homeowners are realizing that on their own. Flammable roofs are being replaced with more fire-resistant ones. Homeowners are clearing vegetation around their property to create buffers from flames. Prescribed fire is becoming more common.

Fire experts warn that billions of dollars in federal, state and local investments will be needed to reduce the risk of wildfire substantially in the West. But the COVID-19 pandemic, coupled with the soaring costs of fire suppression, means that money is in short supply.

“Nationally, we’re faced with: What can we do to scale this up so that communities don’t have to struggle with it on their own?” says Jennifer Balch, fire scientist at the University of Colorado Boulder. “Because every homeowner expects firefighters to show up when there’s a fire than threatens their home, but they’re maxed out. There’s just no way they’re going to be able to fight every fire.”

The truce between people and fire is being negotiated under challenging conditions. A century of suppression has left Western forests overgrown. Hotter temperatures stoked by climate change are drying out the vegetation and priming it to burn. And millions of people continue to move to forested areas, upping the stakes and putting more strain on already-stressed landscapes. 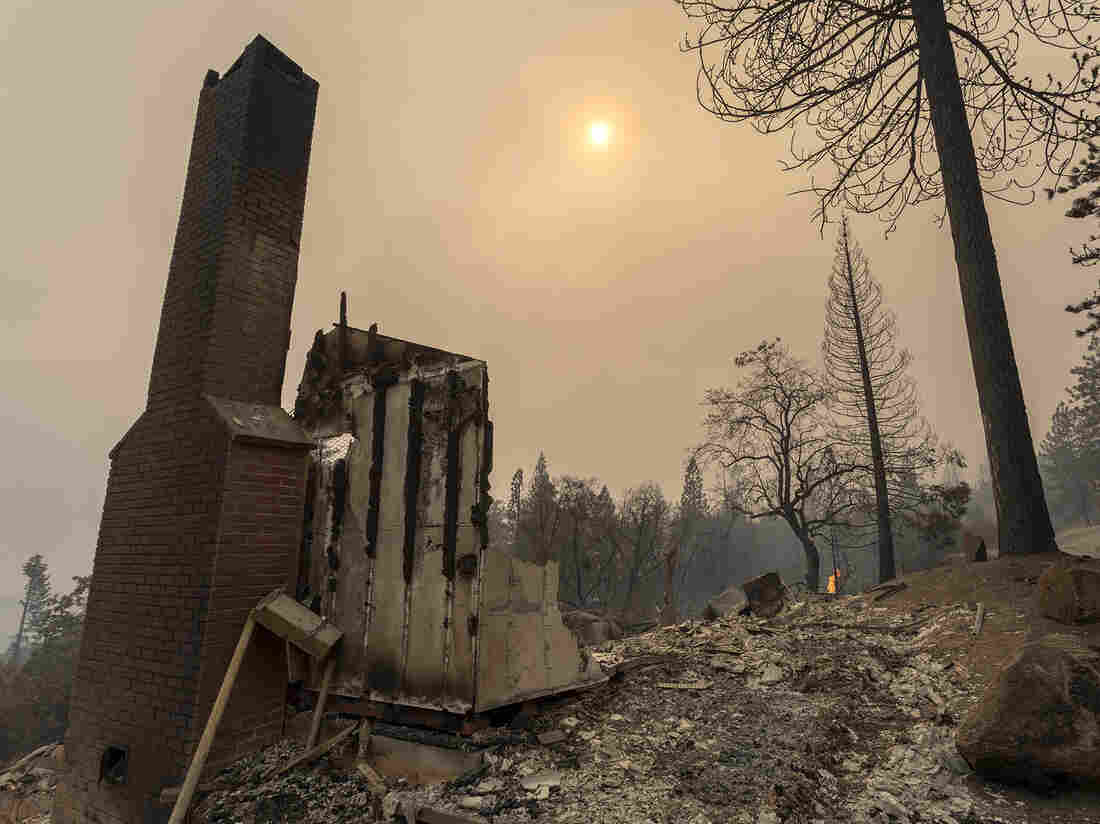 Retrofitting homes with fire-resistant materials can improve the chances they survive wildfires. Here, a home is destroyed after the Creek Fire swept through the area near Shaver Lake, Calif. David McNew/Getty Images hide caption

But when a fire sweeps into a community, it can be a wake-up call to reduce future risks. In 2003, the Old Fire burned more than 90,000 acres in Big Bear, a heavily forested town in the Southern California mountains.

“There were [300] or 400 houses that were lost,” says Jeff Willis, fire chief with the Big Bear Fire Department. “It was also during that fire that we evacuated the entire community for about a week period. So that was a big moment of recognition is what I would say.”

Afterward, the fire department took stock of the region’s vulnerabilities. The surrounding forests were dense and overgrown, potentially providing fuel for bigger fires. Many homes, built decades ago, had wood roofs that could ignite from embers blown far ahead of a fire.

The fire department passed a sweeping “community wildfire protection plan.” It inspected properties and enforced requirements to trim dry brush and trees around homes. It installed evacuation signs around town to guide residents in an emergency.

As bad as it is, it’s going to get worse.

Tom Harbour, former director of fire and aviation at the U.S. Forest Service

Over almost a decade, more than 1,000 wood roofs were replaced with fire-resistant materials, thanks to a grant program that offset the cost for homeowners. The fire department thinned out forests adjacent to residential areas, working alongside the U.S. Forest Service, which manages national forest land in the region.

“That was a heck of an effort,” Willis says. “Gradually over time, though it was initially controversial, I think we made tremendous strides.”

Big Bear was one of the first California communities to launch such a comprehensive effort. While it doesn’t guarantee homes and buildings will survive an extreme fire, it boosts their chances. The problem has been maintaining and expanding the safeguards.

“The community risk reduction and fire prevention, all of that takes a second seat to the main mission, which is responding to emergency incidents,” he says. “What I would need, and I know I’m not alone from a fire chief’s perspective, we would need to double our budget.”

Big Bear Fire Department has largely relied on state and federal grants, totaling more than $5 million since its prevention plan began. But with more communities vying for those dollars, they’re harder to get. This year, the department was turned down for three out of four grants for a curbside vegetation chipping program, which helps homeowners break down the brush on their property.

The community also voted down a local tax measure in March that would have provided new funding. Now, the fire department is looking at cutting staff. “Unfortunately, there’s a lot more that we should do,” Willis says. “We are and were and still remain a community at risk.”

Funding has long been a problem for efforts to reduce wildfire risk.

In 2015, a report published by the Forest Service warned: “As more and more of the agency’s resources are spent each year to provide the firefighters, aircraft, and other assets necessary to protect lives, property, and natural resources from catastrophic wildfires, fewer and fewer funds and resources are available to support other agency work — including the very programs and restoration projects that reduce the fire threat.”

Congress took a step to address that in 2018, passing a “fire funding fix” that allows the Forest Service to tap federal emergency disaster funds when suppression costs exceeded its budget. The “fix” goes into effect this year, but fire veterans and ecologists are skeptical that it alone will address the underlying problems. 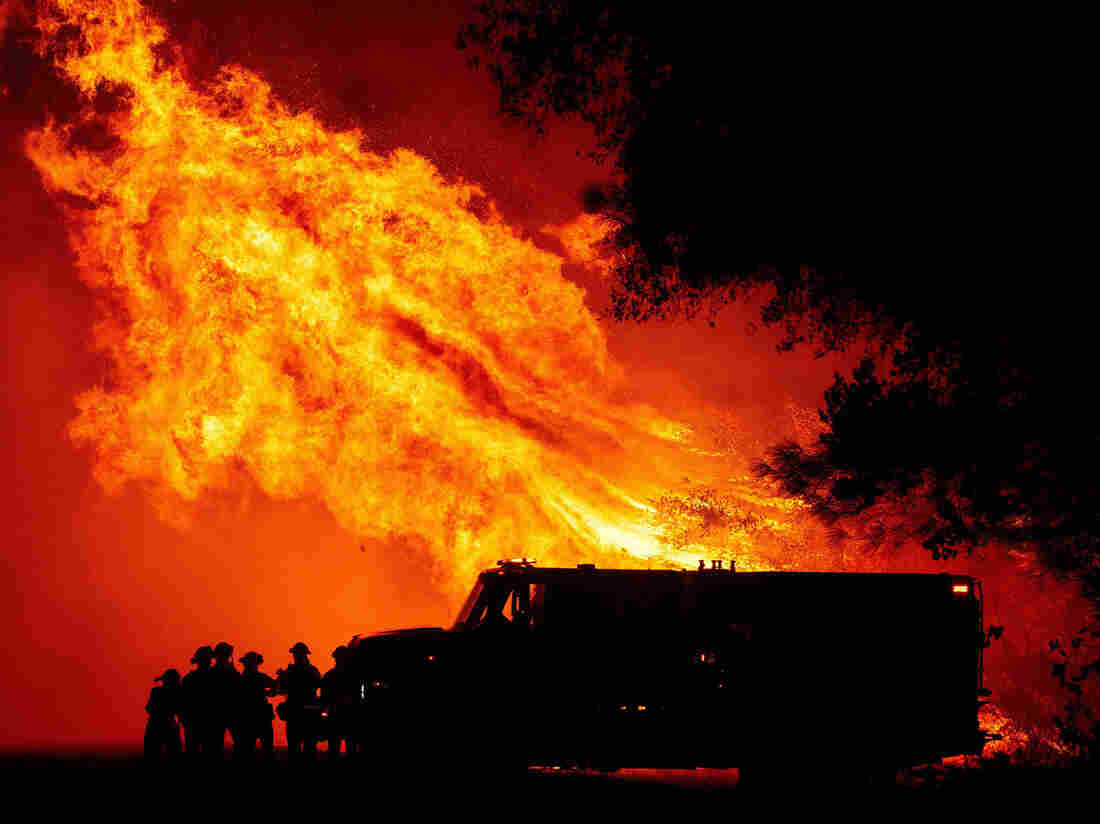 Nearly half of the agency’s $5.14 billion budget is still earmarked for fire suppression.

“There’s definitely not enough economic support,” says Crystal Kolden, a fire scientist at the University of California, Merced. “How we have always addressed natural hazards as a nation is that we have invested in reducing risk with federal tax dollars because natural hazard reduction is a social good.”

Earlier this year, California announced a new state-federal effort to reduce wildfire risks. The goal is to treat 1 million acres of forest and wildland annually with prescribed fires and forest thinning projects.

Both initiatives address overgrown forests. But fire ecologists say it’s going to take a wider range of solutions to protect communities. What works in one place might not in another.

“What people tend to look for is a single bullet solution,” Kolden says. “And the reality is that fire is complex. All natural hazards are complex. And there is no single silver bullet solution.”

California lawmakers have made several unsuccessful attempts to set aside funding for some other solutions. Earlier this year, $1 billion was canceled for a house retrofit fund due to the state’s pandemic-related budget shortfall. State lawmakers tried last month to pass $3 billion for both emergency fire response and community preparedness, but the legislative session ended.

Without action, the drivers of extreme fire are only going to increase with time. People continue to move into forested areas. The climate continues to warm. And, even with adequate funding, community-based solutions will take decades to implement.