A record low number of close contacts of Covid-19 patients have been reached by the NHS amid concern the Test and Trace system is buckling under pressure.

Only 69 per cent of people identified as a close contact because they had been mingling with a Covid-19 case were tracked down by the NHS and told to self isolate.

When the scheme first launched in May, 91 per cent of close contacts were reached.

Scientists have said the ‘army’ of contact tracers must reach at least 80 per cent of Covid-19 cases and their contacts for the system to work and stop the coronavirus spreading.

The figures also show the time it takes for a test result to come back is getting worse; it can take up to three and a half days for someone tested at a satellite test centre – pop-up sites for places with an urgent need – to find out if they have Covid-19.

In that period, they may have self isolated or stayed of work for no reason if they are negative.

Commenting on the ‘disappointing’ figures, scientists said they suggest parts of the system are ‘starting to show very significant strain’.

The data today supports that cases are creeping up in the UK – and not just as a result of a ramp up in testing.

A total of 9,864 new people tested positive for Covid-19 in England in the week to September 2 – 43 per cent higher than the week before and the highest figure since May. 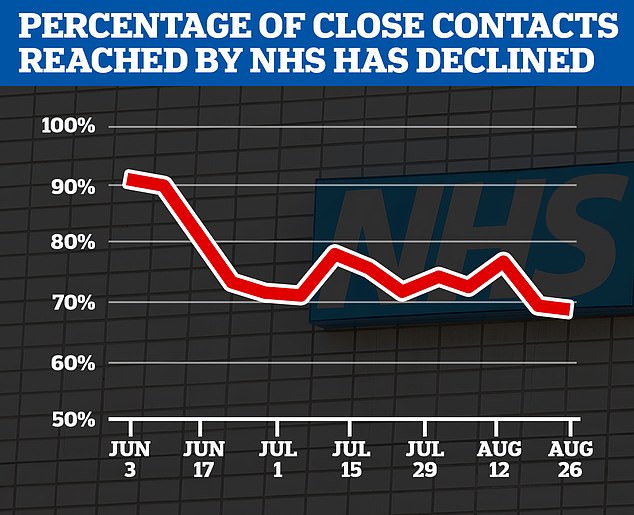 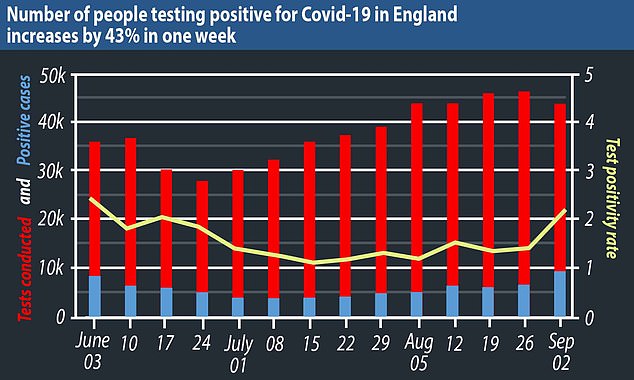 The graph shows how testing has increased since May, but so has the number of people testing positive – known as the ‘positivity rate’. This shows the increase in cases in England is not just as a result of more testing, but of a true jump in transmission

The Government is currently reporting around 2,193 diagnosed cases every day on average.

Although it is significantly higher than the record lows of July, it is nowhere near the number of cases reported at the peak of the pandemic.

Even then, cases reported by the Department of Health were just a fraction of the true number of infections because testing was so limited.

Positive cases have been rising since the start of July and are now 12 per cent higher than the number recorded when Test and Trace launched at the end of May.

A better indication of whether the coronavirus is spreading more, and is not just the result of more tests being conducted, is the ‘positivity rate’ – how many people are getting a positive result of all people tested.

It comes after the Chief Medical Officer for England said an increase in cases was a ‘real phenomenon’, and not just the result of more testing finding more cases in hotspots. 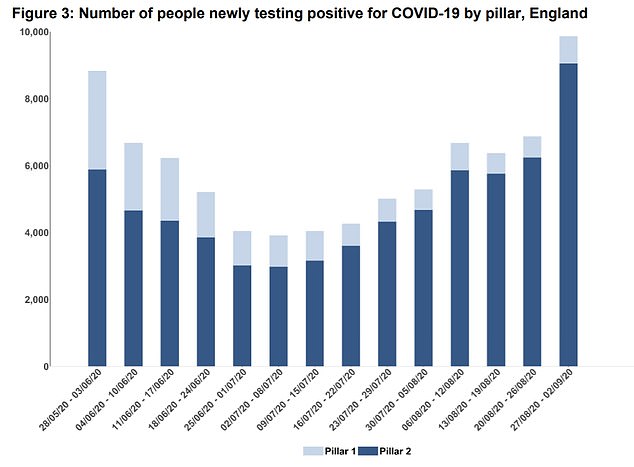 A total of 9,864 new people tested positive for Covid-19 in England in the week to September 2, NHS Test and Trace data shows. It’s the highest number recorded since May and a 43 per cent increase on the week prior 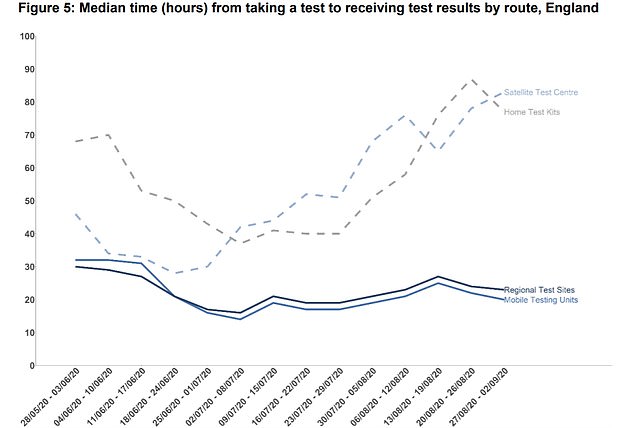 Since the start of July, test turnaround times have doubled for both home testing kits and satellite test centres

An ‘unacceptable’ number of people are overloading the UK’s coronavirus testing system by asking for a test when they don’t have symptoms, the health secretary said yesterday.

He laid the blame for people being directed hundreds of miles from their homes at the door of those who have requested a test but do not have symptoms.

Matt Hancock warned there has been a 25 per cent spike in requests from those without symptoms, meaning many who need them cannot get tests.

‘Of people who got symptoms, 92 per cent got a test within ten miles of (their home),’ he told the Today programme.

‘The reason we have constraints at the moment is not because capacity has gone down, it’s because demand has gone up.’

He said he’d heard of whole schools getting a test, or people getting one before going on holiday just to make sure they were not infected.

Testing capacity has recently been cranked up across the UK to ‘record highs’ but it is still meant to only be available for people who have coronavirus symptoms.

Deflecting allegations that the UK’s testing system is failing, Hancock said that they were carrying out a record number of tests that keeps rising.

‘Even on antigen testing we have record capacity,’ he said. ‘It’s higher than it was last week.’

‘We have got the vast majority getting tests locally, and results quickly,’ he said. ‘But this increase in demand is a problem and it restricts the number of tests available.’

It came after the director of testing, Sarah-Jane Marsh, yesterday apologised to those who were not getting tests and warned they were at a ‘critical pinch-point’.

‘Can I please offer my heartfelt apologies to anyone who cannot get a Covid test at present,’ she wrote.

Dr Daniel Lawson, Lecturer in Statistical Science, School of Mathematics, University of Bristol said: ‘There is now no doubt that cases are growing. Because growth is exponential, the number of new cases will continue to rise rapidly, until our actions prevent this.

‘The government has already acted, but the delay in the infection process, and generating data reports, mean it will be hard to know whether infection rate is controlled by this action until potentially too late.

James Naismith FRS FMedSci, director of the Rosalind Franklin Institute, and professor of structural biology, University of Oxford, said: ‘It seems clear that there is now a real increase in the number of people infected with covid19; it is not just more testing.

‘We are nowhere near the exponential growth seen in March, but the virus is building; this is worrying given winter is coming.’

A positive was that the number of Covid-19 cases reached by the NHS rose slightly, to 82.7 per cent.

Professor Naismith said: ‘In terms of tracing, the number of people transferred to the tracing system grew by 16 per cent [from last week] whilst the performance remained stable, a good sign.

‘However, 16 per cent is less than the 43 per cent jump in the number of positive cases, obviously next week we must see a large jump in people entering tracing.’

A total of 32,359 people were identified as coming into close contact with someone who had tested positive between 27 August and 02 September.

Overall 69.2 per cent of those contacts were reached. This has been steadily declining every week since May.

The total number of close contacts identified has decreased by 41 per cent since the start of contact tracing, the Department of Health said.

The report said the reduction is largely due to ‘non-complex cases’, which have a higher proportion of contacts who are unable to be reached.

Non-complex cases are those handled by call centres or online. In comparison, complex cases, managed predominantly by local health teams, are consistently more likely to be reached.

The figures show some 61.9 per cent of people who got an ‘in person test’ received their result within 24 hours.

This is up from 53.3 per cent in the previous week, but still misses the target set by the Prime Minister Boris Johnson, who pledged that by the end of June, the results of all in-person tests would be back within 24 hours.

Since the start of July, test turnaround times have doubled for both home testing kits and satellite test centres.

It takes an average of 83 hours to get the result of a test taken at a satellite test centres and 77 hours for home test kits.

He added: ‘Track and trace itself continues with little change in performance, though the numbers should be watched carefully in case the system becomes strained as cases rise.’ 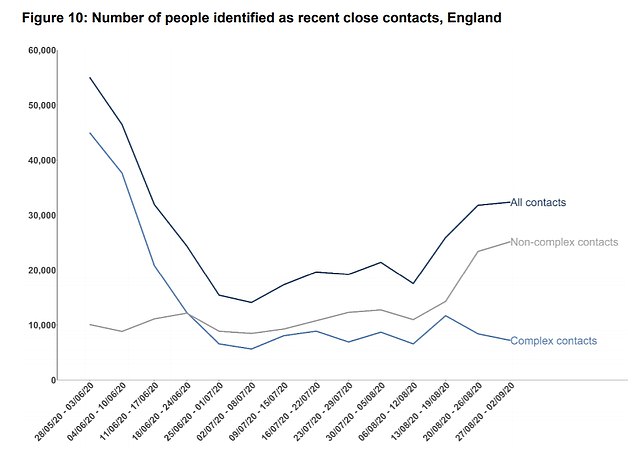 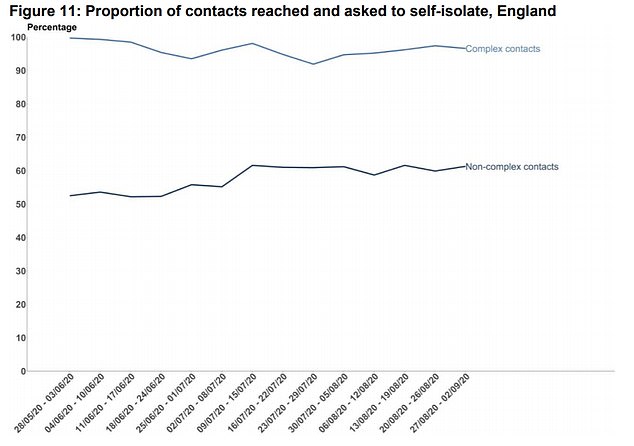 Professor Naismith said: ‘It is disappointing that satellite test centre delays are growing, this suggests that this part of the testing system is starting to show very significant strain. Information is only useful if it is rapid enough to do good, if it cannot be fixed, the resource may be better employed elsewhere.

Despite the latest figures, Baroness Dido Harding, who is interim executive chair of the National Institute for Health Protection, said the system is working.

She said: ‘NHS Test and Trace is working and every week we consistently reach the majority of people testing positive and their contacts.

‘We have now reached almost 360,000 people who may be at risk of unknowingly passing on the virus, helping to curb its spread.

‘We are doing more testing for the British public than other comparable European countries and we are adding thousands more tests a day.’